Sally Openshaw is a Sexual and Relationship Psychotherapist working in private practice in Devon, UK. Sally is a UKCP recognised practitioner and accredited fellow of COSRT (College of Sexual and Relationship Therapist). She works from an integrative relationship model and is recognised by the International Integrative Psychotherapy Association as a trainer, supervisor and practitioner. Sally manages Towerhouse Counselling, (www. towerhousecounselling.co.uk) where she runs a BACP Accredited Diploma course and teaches on a range of CPCAB counselling trainings. Sally completed a four-part training in EMDR in 2013 and is a member of the European Association of EMDR practitioners. Sally recently completed an advanced diploma in Sexual Addiction. She is an experienced Tutor, with a BEd in Education for Adult learners.

Irena Rahne Otorepec studied at the Medical Faculty of Ljubljana, Slovenia, graduated in 1988 and became consultant in psychiatry in 1996. She started working at the University Psychiatric Clinic Ljubljana in 1990. In 1997 she started working in sexual medicine in 1997 under the supervision of Prof. Dr. Slavko Ziherl, who, at the time, was the only expert in this field in Slovenia. In 2012 she passed the 1st European exam and received a title of Fellow of the European Committee for Sexual Medicine - FECSM. In 2013 the Outpatient Clinic for Sexual Health (at the University Psychiatric Clinic Ljubljana) was opened, as the first of its kind in Slovenia, and she works there on a full-time basis. She is an active member of the ESSM - European Society for Sexual Medicine, ISSM - International Society for Sexual Medicine and EFS-European Federation for Sexology. In Slovenia, she is a member of SSSM- Slovenian Society for Sexual medicine and Slovenian Society for Sexology. In 2013 she became the president of the Slovenian Interdisciplinary Team for gender identity confirmation.

Karin Kanc is one of the organizers of this meeting. As a diabetologist, she has her own diabetes practice (jazindiabetes) in Ljubljana, Slovenia and is also a certified integrative psychotherapist (IIPA). She has been active in the field of psychological aspects of diabetes for more than 20 years and is a pioneer in her country combining diabetes and psychotherapy with psychology. Lately, her focus is mindfulness in diabetes and mindful eating. 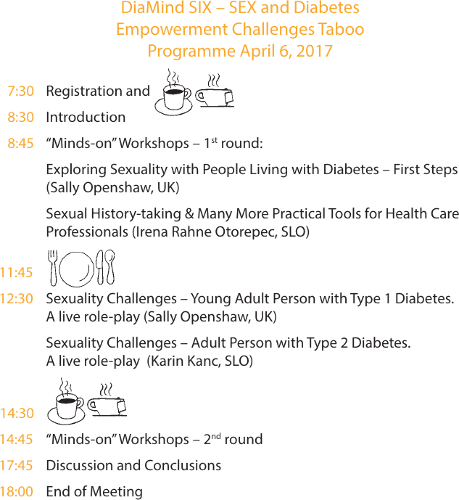